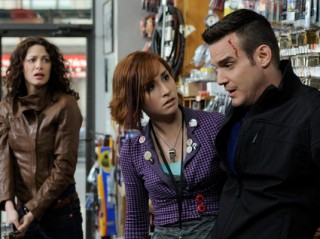 An abbreviated fifth season of Warehouse 13 will be the show’s last.

Warehouse 13 has been a signature show for Syfy, not only setting viewership records but also being the first show launched with the cable network’s 2009 rebranding effort.  The good news is that it has technically been renewed: the final run of episodes will constitute a fifth season for the show.

The bad news is that it’s only six episodes, giving the writers a chance to wrap up the story and give the characters a proper send-off before the cancellation axe falls.  That’s more than most cancelled series get.

The show is currently airing the back half of its extended, 20-episode fourth season, which started last summer.

A few years ago Warehouse 13 looked to be that show poised to break Syfy Channel’s 5-season curse.  The cable network has never funded an original scripted drama longer than that.  Stargate SG-1 and Stargate Atlantis were both axed after five years on Syfy (SG-1 aired its first five years on Showtime), despite their dedicated fan base and creative strength.  Eureka, too, only made it five years.

Two of Syfy’s once popular signature shows, Battlestar Galactica and Farscape, only made it to the 4-year mark.

The following two episodes have been the series’ lowest-rated outings.  Of course that doesn’t take into account DVR-delayed and online viewing, where genre shows in particular perform quite well.

New episodes of Warehouse 13 are currently airing Mondays at 10/9c on Syfy.

Is it a travesty, or is it time for Warehouse 13 to end? Sound off below!