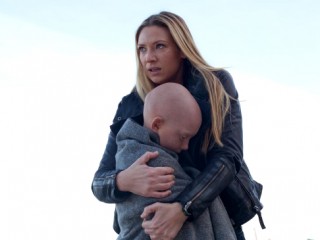 Only two genre series from the 2012-2013 broadcast season are ending their runs.

It has been a successful year for science fiction and fantasy on network television, attested by the renewal of six genre shows on network television — the Big 5 broadcasters of ABC, CBS, FOX, NBC, and The CW. The networks have also picked up an astonishing 10 new genre-tinged series for next season.

But it’s not all smiles for every series on the air this year. Here are just two that didn’t make the cut for next year — both airing on FOX:

Fringe (5 seasons, 2008-2013).  We knew when FOX brought back Fringe for a truncated fifth season that it would be the show’s last, so let’s count this as “concluded” rather than “cancelled.”  Agent Olivia Dunham and her team tracked supernatural phenomenon and fringe science through an even 100 remarkable episodes.  The final aired in January.

Touch (2 seasons, 2012-2013).  Kiefer Sutherland’s family drama with a supernatural twist was a great idea and started strong right out of the gate, with a terrific pilot and more than 12 million viewers.  But for some reason those viewers didn’t stick around to see the connections put together by Martin Bohm and his young son, Jake.  Touch got a solid second chance this spring, but with collapsed ratings the writing has been on the wall for some time.  It’s a real shame — this was a good show.

The bloodshed is a bit more wide-spread on cable, unfortunately, with Alphas (Syfy), Merlin (BBC/Syfy), the U.K. original Being Human (BBC3), and Primeval: New World (SPACE/Syfy) so far confirmed cancelled.  The last of these has yet to be broadcast in the U.S., and there’s always hope that a new broadcaster could send the Canadian original series back into production.

The good news is that the 2013-2014 season looks to be a banner year for fans of the sci-fi and fantasy genre.  With the network upfronts taking place all this week, stay tuned for our full run-down of the new shows!