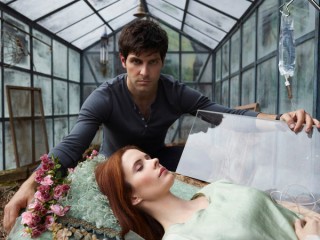 Revolution, Arrow, Grimm, and many other favorite genre shows will be back this fall.

We’re just days away from the much-anticipated media upfront presentations by the five U.S. broadcast networks (as well as some cable channels).  That means we’re learning which shows have been renewed for another year, which are cancelled, and which brand new series have officially made the schedule for the 2013-2014 broadcast season.

Look for our run-downs of new and cancelled series in the days ahead.  In this post, we’ll run down the list of sci-fi or fantasy-themed television series that have been renewed on ABC, NBC, FOX, CBS, and The CW.

Once Upon A Time (Sundays, 8/7c). Emma, Regina, Mary Margaret, David, Mr. Gold, and the rest of Storybrooke’s residents are coming back next season for more adventures! After the show’s premise was turned upside down at the end of the first season and all the characters remembered their true identities, it remained to be seen just how the show would keep its fresh formula going through Season Two.  The writers have opted for more short-term stories (Emma and Mary Margaret trapped in the fairy tale world, Cora’s invasion of our world, etc.), which at times have made the show feel like it was a little less sure of the overall story it wants to tell.

But Once continues to deliver interesting characters and storylines, and we’re excited to see it expand into a franchise with ABC giving the green light to a spin-off that follows Alice into Wonderland.  ABC may choose to pair the duo on Sunday nights, and hopefully the two will work together to weave some interesting story arcs and character crossovers.

CBS doesn’t air any scripted dramas we would consider science fiction or fantasy, but the stellar Person of Interest comes pretty close.  A machine that has access to surveillance cameras and phones all over the country is able to predict violent crimes with a remarkable degree of accuracy.  But while our heroes (Michael Emerson and Jim Caviezel) know who will be involved, they never know whether that person will be the victim or perpetrator.  By the end of Season Two the Machine’s artificial intelligence seems so sophisticated that one has to wonder whether perhaps it is an emerging sentient consciousness.

Person of Interest is hot right now (having just aired its season finale to more than 13 million viewers) and back in the fall for Season Three.

Arrow (Wednesdays, 8/7c). One of the best new shows of the season, Arrow follows billionaire playboy Oliver Queen in his return from a 5-year exile on an island and his transformation into a bow-wielding vigilante.  Oliver is trying to right the wrongs of his dead father by taking out people on the list left to him.  There’s action, intrigue, and lots of villains and other characters from the classic DC comic series.

Arrow has been averaging more than 3 million viewers (Live + Same Day) this season, and airs its finale this Wednesday.

The Vampire Diaries (Thursdays, 8/7c).  The hot vampire drama got a creative shot in the arm this year, with Elena’s own transformation and the group’s search for a possible cure for vampirism.  With 2 and a half million viewers each week, The Vampire Diaries is charging into its fifth season along with a brand new spin-off series — The Originals.  The fourth season finale airs this next Thursday (May 16).

FOX is all tapped out on the sci-fi and fantasy front, with Touch getting the axe and Fringe completing its 5-year run in January.  But not to worry: the network has given the green light to two new genre shows for the fall season, Almost Human and Sleepy Hollow.  Not coincidentally, both include writers and producers from Fringe.

Grimm (Tuesdays, 10/9c).  The “little fantasy show that could” started small but has built a significant audience for NBC — not to mention one that is fiercely loyal to the show.  It follows Portland Police Detective Nick Burkhardt (David Giuntoli), who has learned that he is one of the legendary Grimms — monster-hunters who can see creatures who pose as humans for what they really are.

Grimm did so well this year that NBC has just moved it off the low-expectations Friday night slot and over to the very competitive Tuesdays. It remains to be seen if it will get to keep this time slot when it returns in the fall for its third season, but right now the show is one of the few gems the network has in its increasingly tarnished crown.  The show might also see an early premiere: last year NBC debuted Grimm in August, getting a jump on the competition, and then gave it an extra-long hiatus.

Revolution (Mondays, 10/9c).  One of this past season’s biggest hits, Revolution tells the story of a world 15 years after a blackout knocked out all power around the world and brought about the collapse of civilization.  What was once the United States of America is now a group of loose confederations feuding with one another — the Monroe Republic, the George Federation, Texas, the Plains Nation, and (presumably) others.  Headed into the final episodes of Season One, our heroes (and anti-heroes) are fighting against the tyranny of General Sebastian Monroe and trying to turn the power back on.

I’ve kept with this series all season long.  It’s been creatively steady — rarely bad, but also never quite achieving greatness.  The back half of the season has seen some significant retooling that has only helped the show — killing off one especially annoying character (actually, a plot device with legs), amping up the mythology of the blackout, and giving the stand-out cast members (Elizabeth Mitchell and Giancarlo Esposito) more to do.

Which network renewal are you happiest about?