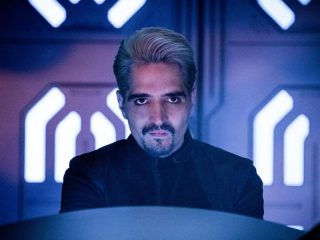 When Gypsy arrives Barry learns that the villain who is stealing advanced technology from all over the city — who calls himself Abra Kadabra — is from the sixty-fourth century. And after their mutual enemy is apprehended, things are complicated when Abra Kadabra offers to trade Savitar’s identity for his freedom. Meanwhile, Julian has Caitlyn’s life in his hands after an explosion.

The Flash (Grant Gustin) battles Abra Kadabra (guest star David Dastmalchian), a villain from Earth-19, who makes him a tempting offer - release him and Abra Kadara will reveal Savitar's true identity. Desperate to save Iris (Candice Patton), Barry considers taking the deal but Gypsy (guest star Jessica Camacho) breaches in to capture the villain for her own reasons and during the melee, Abra Kadabra manages to escape. Barry is furious that Gypsy interfered but Gypsy refuses to back down, forcing Cisco (Carlos Valdes) to take sides. Meanwhile, Julian (Tom Felton) is still a bit cold towards Caitlin (Danielle Panabaker) but when she is severely injured in a battle with Gypsy, he rushes to her side.