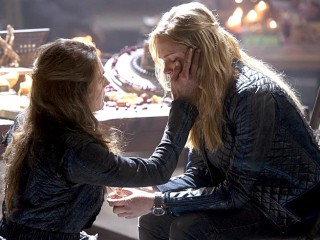 Written By:
Dorothy Fortenberry
Directed By:
Omar Madha
Our Rating:

En route to a burial ritual with the Lexa and the Grounders, Clarke is plagued by visions of the man she killed. An assassination attempt throws the new alliance into chaos, and inside Mount Weather Monty and the group come up with a plan to contact the outside.

THE GHOST IN YOU - Clarke (Eliza Taylor) strikes a deal with Lexa (guest star Alycia Debnam Carey) and Indra (guest star Adina Porter). Abby (Paige Turco) and Kane (Henry Ian Cusick) begin to realize that decision making powers are out of their hands. A seething Raven (Lindsey Morgan) is unable to control her emotions. A bold move threatens to destroy the newly formed alliance between the sky people and the Grounders, and a familiar face haunts Clarke. Meanwhile, back at Mount Weather, Monty (Christopher Larkin) comes up with a risky plan. Isaiah Washington, Bob Morley, Marie Avgeropoulos, Devon Bostick and Ricky Whittle also star.