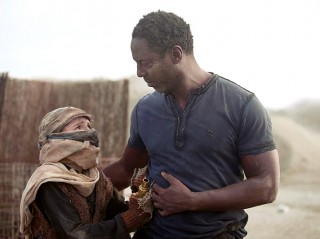 Written By:
Kim Shumway
Directed By:
P.J. Pesce
Our Rating:

Jaha is rescued by a family living in the desert, while Clarke and Anya attempt to elude capture in the forest. Raven is frustrated by her new limitations, and Bellamy’s group attempts to rescue an Ark survivor from a cliff-face.

After being betrayed by someone she thought she could trust, Clarke (Eliza Taylor) takes matters into her own hands and proves she's not going down without a flight. Bellamy (Bob Morley), Finn (Thomas McDonell) and Murphy (guest star Richard Harmon) race against time to save a stranger. Meanwhile, tensions rise between Raven (Lindsey Morgan) and Wick (guest star Steve Talley) while working together, and an unexpected reunion occurs. Paige Turco, Devon Bostick, Ricky Whittle, Christopher Larkin, Isaiah Washington and Henry Ian Cusick also star.