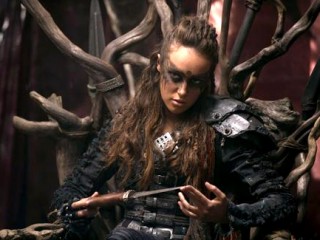 Written By:
James Thorpe
Directed By:
Antonio Negret
Our Rating:

Abby is put in a difficult position when her predecessor arrives at Camp Jaha and tells everyone they have to leave. Clarke is called upon to try and help Lincoln recover from his terrifying condition, leading to a new plan to forge a peace with the Grounders.

THE THIRD WAY Abby (Paige Turco) is determined to find a way to protect her people from a coming attack by the Grounders, even if it means heading into unknown territory and leaving some captives behind. A worried Bellamy (Bob Morley) convinces Clarke (Eliza Taylor) to go with him to the drop ship, where he and Octavia (Marie Avgeropoulos) reveal a dangerous secret. Clarke comes up with a bold new plan to stop the Grounders' attack, leading Abby to a desperate decision. Meanwhile, at Mount Weather, Jasper (Devon Bostick) and Monty (Christopher Larkin) begin to question the motives of their new friends, while Dr. Tsing (guest star Rekha Sharma) conducts a deadly experiment to determine how to make use of the captives. Thomas McDonnell, Ricky Whittle and Isaiah Washington also star.