Browse: Home / 2016 / April / The Punisher Will Have His Own Netflix Series 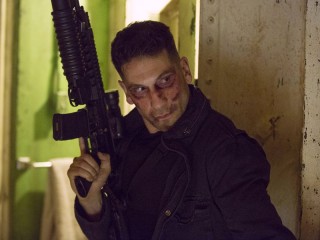 The rumors are true: Jon Bernthal’s Punisher is getting his own series at Netflix.

Netflix made the announcement today, ordering the Marvel spin-off project to series.

Producers and Netflix execs were reported to be enthusiastic about the character and Bernthal’s portrayal as soon as cameras began rolling on Daredevil‘s second season, where the character made his Netflix debut.

Bernthal plays Frank Castle, a military vet who lost his family in a mob shoot-out after returning home from war. Now the heavily-armed vigilante wages a one-man war against the criminal element — often putting him at odds with heroes like Daredevil (Charlie Cox).

The Punisher is the sixth Marvel original series in the deal with the streaming giant, following Daredevil, Jessica Jones (greenlit for a second season), Luke Cage (premiering September 30), Iron Fist (in production for a 2017 debut), and the team-up mini-series The Defenders.

Daredevil and the other Marvel shows have proved to be a big win for Netflix so far, drawing significant viewership (though Netflix does not disclose numbers) and being positioned as a flagship original series. The expansion of the original deal with Marvel shows a great amount of confidence in the characters and the stories being told.

Stick with SciFi Stream for more from the Marvel TV universe.