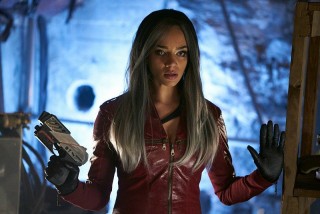 We’ve been eagerly awaiting news of the return of Dark Matter and Killjoys — two of our favorite new sci-fi shows from last year. Now the date has been announced.

Both series will return with their second seasons on Friday, July 1. Killjoys will air at 9 p.m. Eastern and Pacific, followed by Dark Matter at 10 o’clock (9 Central). The shows air at the same day and time on Canada’s SPACE.

Dark Matter Season Two will also drop on SyfyUK in the United Kingdom on Monday, July 4, and on SyfyDE in Germany one week later, July 11.

SPACE released the first-look image at Killjoys‘ Dutch (Hannah John-Kamen) in the new season, as she and her partner Johnny (Aaron Ashmore) put it all on the line to try and rescue their shipmate D’avin (Luke Macfarlane) from captivity.

Season 2 of the sci-fi adventure series KILLJOYS follows a trio of interplanetary bounty hunters (Ashmore, John-Kamen, Macfarlane) as they hit the ground running to uncover Khlyen’s (Rob Stewart, SUITS) secret agenda. As shocking truths are revealed, they realize the galaxy’s notorious criminals are no match to the threat that comes from within the RAC. Dutch, Johnny, and D’avin’s loyalties are tested as they struggle to find the balance between politics, family, and doing what’s right for the good of The Quad. With so much on the line, the trio start to wonder if the warrant is still all. 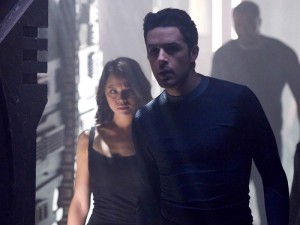 The Season Two premiere of Dark Matter follows up on the shocking events of the first season finale, which revealed the identity of a mole among the Raza‘s crew and saw the group falling into the hands of the Galactic Authority.

Keep your browser locked on SciFi Stream all summer long for our coverage of these two great shows!