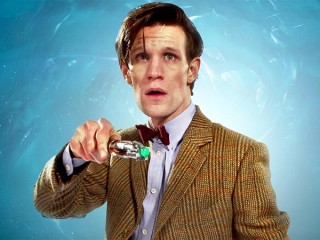 Say it ain’t so!  The Eleventh Doctor is out at the end of 2013, the BBC confirmed today.

Matt Smith will step aside in Doctor Who‘s lead role, which he has held for four years and three broadcast seasons of the popular show. Smith has played the Doctor in Seasons Five, Six, and Seven of the new updated Doctor Who that launched in 2005, with Christopher Eccleston in the role.

Smith will finish his tenure with the show’s 50th anniversary special, airing November 23 and co-starring Tennant and John Hurt, and the annual Christmas special on Christmas Day.  The Doctor will regenerate in the Christmas episode.

Under Smith’s tenure the series has truly gone global, including airings on the same day in major markets like the U.K. (BBC One), United States (BBC America), and Canada (SPACE).

“Doctor Who has been the most brilliant experience for me as an actor and a bloke, and that largely is down to the cast, crew and fans of the show,” Smith said in a statement. “I’m incredibly grateful to all the cast and crew who work tirelessly every day, to realise all the elements of the show and deliver Doctor Who to the audience. Many of them have become good friends and I’m incredibly proud of what we have achieved over the last four years. ”

The BBC has already renewed Doctor Who for an eighth season, to air in 2014. Smith had given positive signs in media interviews of returning for another year, but now fans will be introduced to the Twelfth Doctor instead.

Stay tuned to SciFi Stream for more on the show’s future as info becomes available! Doctor Who returns for the 50th anniversary special in November.