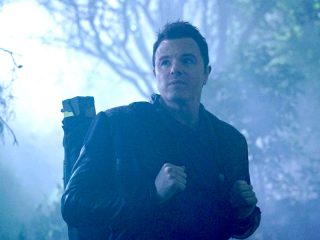 Ed’s vacation with his new flame is interrupted when their shuttle is captured by the Krill, leaving him face-to-face with and old foe. Gordon informs Kelly that he wants to take the Command Test.

ED FINDS HIMSELF BEHIND ENEMY LINES ON AN ALL-NEW "THE ORVILLE" THURSDAY, JANUARY 17, ON FOX

Ed finds himself behind enemy lines when he crash-lands on a mysterious planet. Meanwhile, Kelly questions why Gordon wants to take the Command Test in the all-new "Nothing Left on Earth Excepting Fishes" episode of THE ORVILLE airing Thursday, Jan. 17 (9:00-10:00 PM ET/PT) on FOX. (ORV-203) (TV-14 D, L, V)