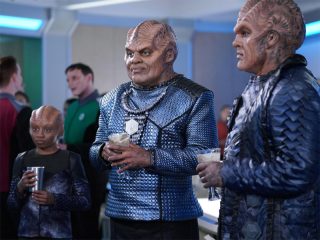 As The Orville travels to Bortus’ home planet for an annual purification ceremony Ed discovers that Kelly has started dating someone. Gordon asks John for help asking out the new dark matter cartographer, and Claire’s parenting is put to the test.

ED GETS JEALOUS WHEN KELLY STARTS DATING AGAIN ON THE ALL-NEW TIME PERIOD PREMIERE OF "THE ORVILLE" THURSDAY, JANUARY 3, ON FOX

As The Orville heads towards Moclus for Bortus' special once-a-year ceremony, Ed discovers Kelly has moved on and has started dating. Meanwhile, Gordon asks for John's help in getting game, and Claire turns to Isaac for parenting advice in the all-new "Ja'loja" time period premiere episode of THE ORVILLE airing Thursday, Jan. 3 (9:00-10:00 PM ET) on FOX. (ORV-201) (TV-14 L)