Browse: Home / Show Archive / Once Upon A Time / Season Three / A Curious Thing 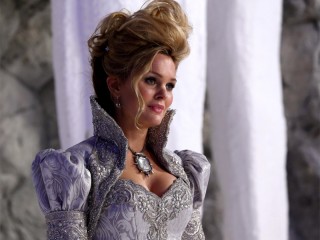 Zelena blackmails Hook in an attempt to drain Emma of her magical powers, while things heat up between Regina and Robin Hood. In Fairy Tale land Snow and Charming go in search of the Good Witch Glinda to see if she can help them defeat Zelena.