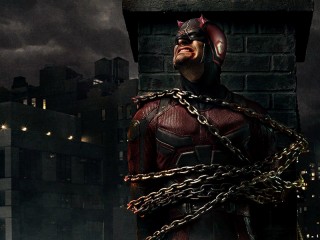 While there is plenty of info on Season Two of Daredevil — as well as several awesome trailers — one thing Netflix has kept under wraps are the titles of this year’s 13 new episodes.

Well now we have the list, along with the final trailer for the new season. (Watch it below!)

Daredevil‘s sophomore season just dropped (at 12:01 a.m. Pacific Daylight Time) on Netflix, with all 13 episodes now available to subscribers of the streaming service. Here’s what we will be watching for the next several days:

Season Two brings major Marvel Comics characters Elektra (Elodie Yung) and the Punisher (Jon Bernthal) to the show, as Matt Murdock faces new threats to Hell’s Kitchen from the Japanese mafia and an ancient order of warriors called the Hand.

We’ll be filling out our Daredevil episode guide as we watch the show, adding episode images and our ratings opinion. Stick with SciFi Stream for more, and talk about the show with other fans now at GateWorld Forum!