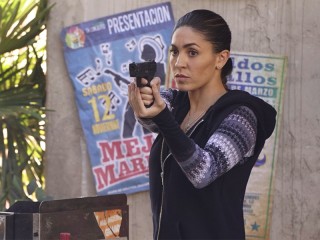 Marvel’s Agents of S.H.I.E.L.D. is back in just a few weeks, and today ABC released the first look at the mid-season premiere. Watch the teaser trailer below.

Titled “Bouncing Back,” the episode picks up where the show left off last fall (SPOILER warning!): S.H.I.E.L.D. is trying to recover from Coulson and Fitz’s recent trip to the alien world Maveth, unaware that their worst enemy has followed them home — former S.H.I.E.L.D. Agent Grant Ward, now inhabited by the powerful Inhuman that Hydra has been seeking for generations.

The March 8 episode will introduce Natalia Cordova-Buckley (Los Minondo) in a new recurring role. She’ll play Elena Rodriguez, described as “a tough, street-wise Colombian woman given Inhuman abilities” — specifically, super-speed. Elena is based on the character Slingshot from the “Secret Warriors” comic series.

“We announced at San Diego Comic-Con that the Secret Warriors story will be coming to Marvel’s Agents of S.H.I.E.L.D., and we’re pleased to say that will continue to play out in the second half of our season,” said Jeph Loeb, Executive Producer and Head of Marvel Television. “Natalia embodies both the toughness and the warmth necessary for the role of Elena as we bring another piece of the team to the screen for the first time.”

Keep up with Agents of S.H.I.E.L.D. all season long with our show guide. The series airs Tuesdays at 9/8c on ABC.