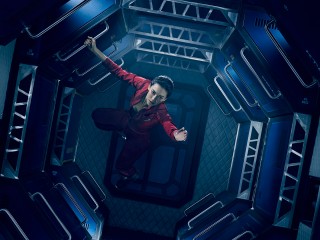 We’ve seen plenty of new scripted science fiction on Syfy Channel in 2015, as the network works hard to reposition itself squarely back in the hard sci-fi genre — including everything from time travel in January’s 12 Monkeys to space bounty hunters in this summer’s Killjoys and amnesiac criminals in Dark Matter.

But the network may be saving its most ambitious new series for last.

Syfy announced today that The Expanse will premiere with a 2-night event on December 14 and 15 (10/9c) — a Monday and Tuesday. After that, the space-based character drama settles into its regular time slot on Tuesday nights at 10 p.m. on the coasts.

The episodes will follow the also just-announced airings of miniseries Childhood’s End, the first time the classic Arthur C. Clarke story has been adapted for television. The 6-hour event will air from 8 to 10 p.m. E/P on December 14, 15, and 16.

There’s also a second trailer for The Expanse, released last month during Comic-Con. Take a look below. (The first trailer is here.)

Set 200 years in the future, when humans have colonized the solar system, The Expanse tells the story of a hardened detective (Thomas Jane) and a rogue ship’s captain (Steven Strait) who come together to investigate the case of a missing woman. But the case quickly evolves into a race across the solar system to expose the greatest conspiracy in human history. 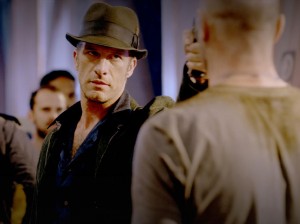 It’s been somewhat unclear whether Syfy was going to position the new show as a miniseries or a regular weekly show (or something in between) — but now the “miniseries” language has dropped away and the network’s latest press release clearly identifies the 10-episode run as The Expanse‘s “first season.”

The scheduling strategy also shows that Syfy wants to do something different. December has traditionally been Syfy’s window for high-profile miniseries events, a la Taken, Tin Man, and last year’s Ascension. It’s also the time of year when other shows go on hiatus for the holidays — which just may give The Expanse a leg up in establishing itself among viewers looking for something new in December and January, when the networks are airing repeats.

Stick with SciFi Stream for more on The Expanse, including our show guide, this fall!