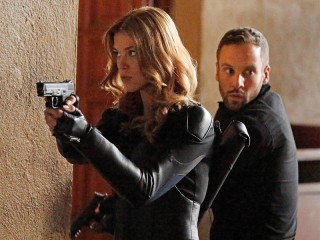 ABC has given a pilot order to Marvel’s Most Wanted, a potential new series set in the Marvel cinematic universe.

The series would star Adrianne Palicki and Nick Blood as Agent Bobbi Morse (a.k.a. Mockingbird) and Lance Hunter, two characters who proved to be big hits when they were introduced in the second season of Agents of S.H.I.E.L.D.

The characters were previously married and have continued their on-again, off-again romance on the show.

There were talks of spinning off the characters last spring, but ABC put the breaks on development just before the May upfronts. Many fans were vocal with their opinions about ABC and Marvel yanking two popular characters off the flagship series just when it seemed to be finding its mojo.

The pilot will likely shoot early next year as part of the regular pilot process.

Agents of S.H.I.E.L.D. returns with its third season on September 29, and will focus on the Inhumans and “Secret Warriors” storylines. Marvel’s Agent Carter will also be back for its second season, bridging S.H.I.E.L.D.’s mid-season break over the winter.