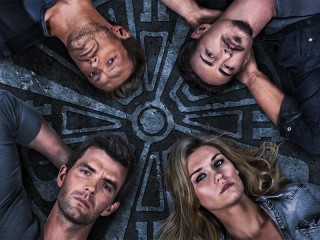 The supernatural drama Haven will air its final episodes when it returns this fall.

Syfy Channel announced today that Season Five of the show will be its last. Haven begins airing the second half of its 26-episode fifth season on October 8 (10/9c) — moving from Friday nights over to Thursdays (for the first time in its run).

The cable network renewed the show last year for a double-length fifth season, airing the first 13 episodes in the fall of 2014.

Syfy said in a statement that the show will get a proper finale that will satisfy the show’s 1.1 million weekly viewers. “Showrunner Gabrielle Stanton has said that the creative team was always prepared for the end, and that the end that’s planned for Haven is the best that they could have possibly done it.”

The move is not a big surprise for long-time viewers of the cable network, which has yet to crack the 5-episode season with an original scripted series. Stargate SG-1, Stargate Atlantis, Eureka, Warehouse 13, and many others all ended at five years on the network.

Haven is based on the Stephen King novella The Colorado Kid, and stars Emily Rose, Lucas Bryant, and Eric Balfour.

Keep up with the final episodes with SciFi Stream’s Haven show guide.