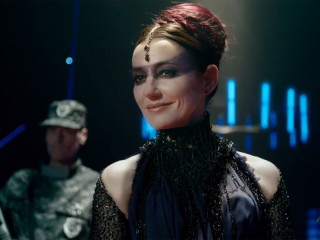 There’s only one week left until Matt Smith’s final episode of Doctor Who! The 2013 Christmas special, “The Time of the Doctor,” is set to air Christmas Day on BBC One, BBC America, and elsewhere around the world.

Today BBC America released a new, 1-minute trailer for the episode, chock full of new footage. Watch it below.

The night starts at 6:00 p.m. Eastern/Pacific with the television debut of the 6-minute short “The Night of the Doctor,” starring Paul McGann as the Eighth Doctor. Then watch an encore of the 50th anniversary special “The Day of the Doctor.” At 8/7c it’s a new retrospective Farewell to Matt Smith, followed by the premiere of the new Christmas special at 9/8c.

The network describes the episode thusly:

Orbiting a quiet backwater planet, the massed forces of the universe’s deadliest species gather, drawn to a mysterious message that echoes out to the stars; and among them — the Doctor. Rescuing Clara from a family Christmas dinner, the Time Lord and his best friend must learn what this enigmatic signal means for his own fate and that of the universe. Orla Brady (Fringe, Mistresses) guest stars as Tasha Lem.

You’ll find more about “The Time of the Doctor” in our Doctor Who series guide, including a gallery with a massive 50 photos and posters!