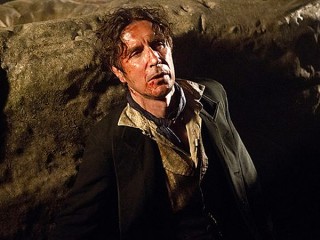 Titled “The Night of the Doctor,” the story serves as a prequel to the 50th anniversary special “The Day of the Doctor” — set to air worldwide on Saturday, November 23.

It is McGann’s first time on screen as the Doctor since the 1996 TV movie, though he has starred in Doctor Who audio dramas.

Beware of spoilers below … Watch the video first!

“The Night of the Doctor” connects some big dots between the Season Seven finale — which introduced John Hurt as a previously unknown incarnation of the Doctor. A younger version of Hurt’s Doctor appears (via reflection) at the end of the webisode, and he’s credited as “The War Doctor.”

His age implies that he may have been in this incarnation for some time, whether fighting the Time War or after it ended — but before he regenerated into the version played by Christopher Eccleston.

It seems to confirm viewer speculation that the 50th will involve the Time War, and that Hurt plays a previously unknown regeneration who came between McGann and Eccleston’s Doctors. That would make Matt Smith’s the twelfth incarnation, and introduce a future story problem: the upcoming regeneration into Peter Capaldi’s Doctor is the last regeneration that he is capable of … at least until something changes the equation.

But we’re not ready to call Smith the Twelfth Doctor (and Tennant the Eleventh, and Eccleston the Tenth) just yet. The Doctor makes a big deal of the fact that John Hurt’s character is not a “Doctor” so much as a “Warrior” — which is what the universe needs to bring an end to the Time War, during which the Time Lords have become just as feared and reviled throughout the universe as the Daleks. (Of course we know that the Doctor does indeed end the war by obliterating both races, leaving himself as the last of the Time Lords — a burden he will carry with him for many years.)

What do you think of “The Night of the Doctor” and Paul McGann’s surprise return?