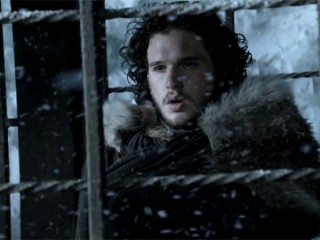 I’ve just finished off my backlog of Game of Thrones, which aired as a 10-episode first season from April to June of this year. This week HBO confirms that Season Two will start in April of 2012 (with another 10 hours), following the events of George R.R. Martin’s second novel in the series: A Clash of Kings

Check out the first, very short teaser for Season Two:

With the fantastic source material, casting, budget and production values, and word-of-mouth, I expected the first season of the show to be great television. In fact, now that I’ve finished watching it, I can say that I think it’s outstanding television. Game of Thrones lives up to every ounce of hype ever spoken of it, and sets a new, astonishingly high standard for the fantasy genre on television.

Some spoilers for the first season follow, for those who haven’t watched it yet.

Game is great at misdirection. As an uninitiated viewer I was never quite certain not only which characters were “good” or “bad” (Tyrion Lannister shows how sympathetic a character can be even while he is fighting against the noble Starks), but even which characters were more or less important. Take Robb Stark, for example: up until the eighth episode or so he’s practically a non-character, left to keep the fires burning in Winterfell when his father goes south to the capital, King’s Landing. But the final three episodes of the season elevate him not only from “supporting character” status (whose name I had to look up to remember what it was), but placed him front and center in the story. 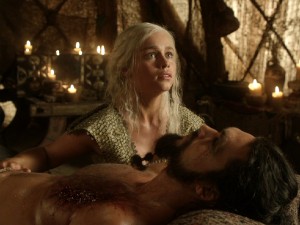 This shift, of course, goes along with his father’s shocking death. Sean Bean’s Eddard Stark is effectively the story’s main character through most of the season. He’s on all the advertising, he’s played by the best-known actor, he’s the head of his House, and he’s the one who is dealing with the political machinations and intrigue going on in the capital. Even the characters are surprised he didn’t make it: his daughter Sansa believes she’s pled successfully for his life to be spared after he is imprisoned for treason, and even the young king’s super-manipulative mother believes she has convinced her son to keep the man alive and exile him to the Wall in the far north.

Instead, it turns out that those sidelined characters I didn’t think much of in the early-going — Jon Snow, Robb Stark, even Daenerys Targaryen — are going to emerge as some of the central characters of the series as it moves forward into its next chapter. Cheers to HBO for investing in such a series, and for allowing the creators to remain faithful to Martin’s vision for the seven kingdoms of Westeros.

Visit SciFi Stream’s unique episode guide for a full run-down of Game of Thrones Season One!