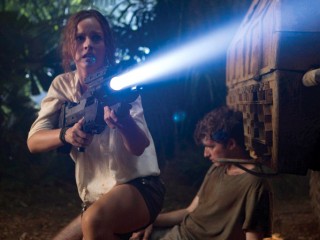 After a long summer of waiting (and enjoying some great summer shows), the new fall season has finally arrived. While some of the new and returning shows haven’t hit the small screen quite yet, there are some newbies that are worth talking about.  So here is the first in what may become a regular series, if anyone out there is interested: The State-of-the-Stream, a.k.a. some thoughts on the sci-fi season so far!

TERRA NOVA (Mondays, 8/7c on FOX) is by far the biggest new show that everyone is talking about. OK, a lot of people are talking about it.  OK … several people have been watching it.  For the big budget, the prime time slot, and the rich pedigree (Steven Spielberg, Brannon Braga, et al), the ratings have been good but not great, hovering around 9 million viewers. The good news is that FOX is trying to keep the show reigned in and not over-extend itself, which included a delayed premiere and a reduction of the first season to 13 episodes. Hopefully that’ll make for higher quality.

I’ve seen the first three hours of the show so far, and it’s off to a solid (if predictable) start. The visuals are good (but not great) for television, but then again no one has really done a weekly dinosaur show for television before.  (I haven’t seen the U.K. series Primeval, so I’m not sure how they compare.)  The biggest drawback is also the show’s biggest selling point: it’s a family show, which means kids, storylines like pining for the cute boy or the girlfriend left behind, and minimal amounts of harm coming to any dinosaurs. It makes for a much broader audience appeal, which seems to be working fairly well so far. But, so far, it feels as though the writers are writing with handcuffs on: they want to go crazy telling stories in this rich, prehistoric world, but have to play it light and safe.

Jurassic Park probably did it better: It had kids and an appeal to wonder, but also wasn’t afraid to have a velociraptor tear a man to shreds. 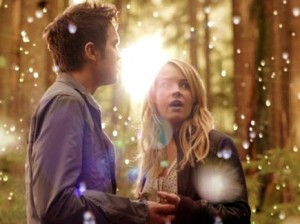 THE SECRET CIRCLE (Thursdays, 9/8c on The CW) is a fairly entertaining hour that has the potential to become a real guilty pleasure. Normally I don’t go in for the teenage romance drama with a fantasy / horror twist (read: all vampire and werewolf shows), but I decided to give this one a shot and see what happens. It includes Thomas Dekker, who did a great John Connor in The Sarah Connor Chronicles. I’ve seen just a couple of episodes so far, and the storyline and duplicitous characters (the parent-child relationships are generally messed up) is enough to keep me going and see if anything interesting becomes of it.

FRINGE (Fridays, 9/8c on FOX) is by all accounts still going strong creatively in its fourth season, with the addition of a new character and some big twists in the storyline recently.  This is a show that I watched weekly during its first season, then quickly backlogged on the ol’ DVR. I have a little over two years to catch up on now, but I’ve read only good things. FOX is obviously behind the show in a great way, renewing it for a full season when many industry Watchers predicted its demise.  Like The X-Files before it, Fringe may have found a good home on Friday nights, where ratings expectations are lower but loyal fans will always find it.

SANCTUARY (Fridays, 10/9c on Syfy) just returned for its fourth season, and fans certainly hope it isn’t the last.  The show is quickly approaching the network’s “Let’s Not Let Any Show Go More Than Five Years” mark, and last spring’s move to Monday nights was an utter disaster for the ratings.  Things are looking better but not amazing (1.38 million watched the season premiere, excluding the DVR-delayed audience) since Syfy moved Sanctuary back to Fridays, where it belongs.

SUPERNATURAL (Fridays, 9/8c on The CW) is one that I’ve never watched, though it obviously has a massively loyal fan base.  What do you Supernatural fans think of the new season so far?

THE VAMPIRE DIARIES (Thursdays, 8/7c on The CW) is a similar story in our house. Never watched it.  Are you happy with where Season Three is headed so far? 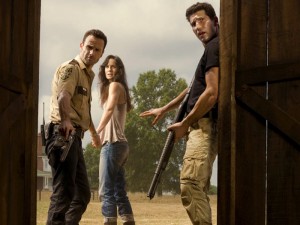 THE WALKING DEAD (Sundays on AMC, starting tonight) begins its second season this week, and I’m ready for more brain-sucking, zombie-splitting adventure!  This was a surprise hit last fall, and fortunately Season Two will extend the story 13 episodes (Season One was made up of just six).  Here’s hoping the show can creatively weather the loss of executive producer Frank Darabont, who AMC apparently screwed-over and didn’t call the next day.  I have high hopes for the show, and just rewatched the Season One finale to get ready for the premiere.

ONCE UPON A TIME (Sundays on ABC, starting October 23) is a new fantasy series that has an intriguing premise and cast, including Stargate Universe‘s Robert Carlyle and House‘s Jennifer Morrison. Then again, the premise is outrageous enough that if it’s not executed well, it could crash and burn into the fields of corny and unbelievable.  But I’ll definitely be checking out the pilot and the first few episodes.  The cast alone guarantees that much.

GRIMM (Fridays on NBC, starting October 28) is that other new show that tries to cross classic fairy tales with characters in the real world, so it could go either way in terms of believability. It’s all in the execution. This one has a more police procedural vibe to it, as the lead character discovers he is part of a long line of “Grimms” — monster hunters. He can see those odd people walking around for what they really are, and take them down.  I feel like I’ve already seen the pilot (a 4-minute preview, below, seems to include the entire storyline complete with spoilers for how it ends).  But Grimm will be worth a look.

WHAT ELSE ARE YOU WATCHING? In non-sci-fi fare, I’m enjoying newcomers Ringer (featuring Buffy‘s Sarah Michelle Gellar) and Person of Interest (with LOST‘s Michael Emerson and Passion of the Christ‘s Jim Caviezel). And I’m a big House fan, and excited to see if the show can keep being awesome with the loss of two major actresses this season. I’ll also be interested to see what Ted Danson looks like on CSI when I get around to it.