Browse: Home / On Hiatus / Legends of Tomorrow / Season Two / Out of Time 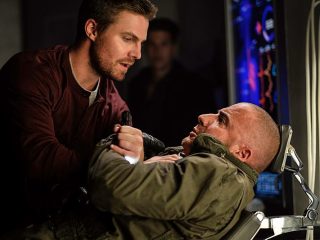 Oliver Queen is led to the Waverider beneath the ocean’s surface, where he learns that the Legends have made a fateful trip to 1942 in order to prevent the Nazis from destroying New York City with an atomic weapon — with help from Albert Einstein.

After the defeat of the immortal villain Vandal Savage and the exposure of the corrupt Time Masters, a new threat emerges. Dr. Nate Heywood (Nick Zano), an unconventional and charming historian, is thrust into the action. After making a shocking discovery, Nate seeks out Oliver Queen (guest star Stephen Amell) for help in finding the scattered Legends. Once reunited, the Legends continue their new mission to protect the timeline from temporal aberrations - unusual changes to history that spawn potentially catastrophic consequences. Their first stop is 1942 to protect Albert Einstein from being kidnapped before the Nazis destroy New York City with a nuclear bomb. Meanwhile, Ray (Brandon Routh) notices that Sara (Caity Lotz) has a mission of her own, which leads them both to face her nemesis, Damien Darhk (guest star Neal McDonough).