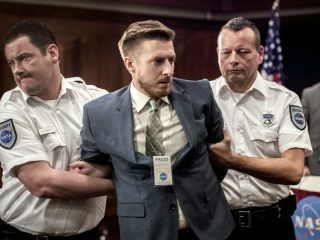 Written By:
Grainne Godfree
Directed By:
Kevin Mock
Our Rating:

The Legends track Commander Steel to NASA in 1970, where Eobard Thawne has infiltrated the Apollo 13 mission in order to acquire the final fragment of the Spear of Destiny. But when the Waverider experiences a disaster, Ray’s life is on the line.

HOUSTON, WE HAVE A PROBLEM

When the Legends track Commander Steel (guest star Matthew MacCaull) to NASA Headquarters in 1970, they learn where Nate's (Nick Zano) grandfather hid the last fragment of the Spear of Destiny. The team notices a time aberration during the Apollo 13 mission and believes that the Legion of Doom might be involved. As the Legends journey into space to intercept Apollo 13, the Waverider suffers massive internal damage and Ray's (Brandon Routh) life is left in jeopardy when he is stranded on the moon. Meanwhile, tension grows between Rip (Arthur Darvill) and Sara (Caity Lotz) as to who is the leader of the team.