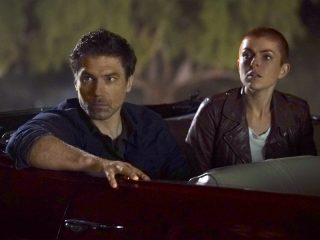 Written By:
Charles Murray
Directed By:
Neasa Hardiman
Our Rating:

With their family reunited Black Bolt and Medusa send Gorgon and Karnak to rescue Declan, while they take Louise in search of Crystal — who plans to use her power over the elements to send them a signal. As the Inhumans clash with Auran’s forces, on Attilan a faction plots to assassinate the false king Maximus.

A FATAL TRAGEDY STRIKES THE ROYAL FAMILY, ON AN ALL-NEW EPISODE OF 'MARVEL'S INHUMANS,' ON ABC

"The Gentleman's Name is Gorgon" - Gorgon and Karnak take on Auran and her Inhuman army with disastrous results, on an all-new episode of "Marvel's Inhumans," airing FRIDAY, OCTOBER 27 (9:01-10:01 p.m. EDT), on The ABC Television Network.