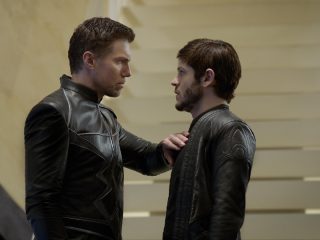 Written By:
Scott Buck
Directed By:
Roel Reiné
Our Rating:

Inside the hidden city of Attilan the silent leader Black Bolt insists on separation from the humans of Earth. But the king’s brother, Maximus, leads a coup d’etat that will change the Inhumans forever.

The highly anticipated new Marvel television series "Marvel's Inhumans" makes its debut on the small screen with the network premiere of the series' first two episodes on FRIDAY, SEPTEMBER 29 (8:00-10:01 p.m. EDT), on The ABC Television Network. The season premiere of "Marvel's Inhumans" introduces the world to the Royal Family and their internal strife, including a divisive conflict between two brothers, Black Bolt and Maximus, and their visions for the future of their people. After a military coup leaves the Royal Family stranded in Hawaii, they must find a way to reunite with each other and return home before their way of life is destroyed forever.

The legendary comic book series has been brought to life in a way that has never been done before, as a version of the first two episodes premiered globally in IMAX theatres on September 1, 2017, where they are currently playing for a limited-time exclusive engagement. ABC will later air the entirety of the series starting on September 29, 2017, with additional exclusive content.

The series is executive produced by Scott Buck, along with Marvel's Jeph Loeb and Jim Chory with Buck serving as showrunner. Roel Reiné directed the first two episodes. This series is a Marvel and IMAX project and is co-produced by Marvel Television and ABC Studios.