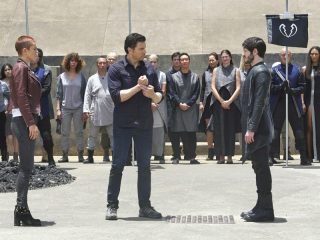 Written By:
Quinton Peeples
Directed By:
Chris Fisher
Our Rating:

The Royal Family returns to Attilan to retake the throne, but Medusa convinces Black Bolt to offer his brother a deal before the city devolves into civil war. Meanwhile Karnak turns to an unlikely ally in a desperate attempt to revive his cousin.

THE ROYALS RETURN HOME TO FINISH MAXIMUS, ON AN ALL-NEW EPISODE OF 'MARVEL'S INHUMANS' ON ABC

"Havoc in the Hidden Land" - With only two episodes left this season, The Royal Family returns to Attilan and comes face-to-face with Maximus. Can a truce be reached or is all-out war inevitable? An all-new episode of "Marvel's Inhumans" airs FRIDAY, NOV. 3 (9:01-10:01 p.m. EDT), on The ABC Television Network.