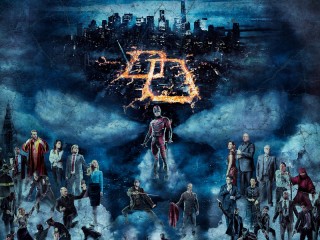 The year 2015 may go down in history as the year when comic book shows really exploded on television — and one of the year’s greatest creative triumphs was definitely Daredevil.

Today Netflix announced the show’s official return date, and released the first full-length trailer for the new season of the show. (Take a look below.) Daredevil Season Two will drop all 13 episodes on Friday, March 18 (12:01 a.m. Pacific Time).

That puts it a few weeks ahead of last year’s April 10 debut, and also one week before the theatrical premiere of Batman v. Superman: Dawn of Justice on March 25. Earlier unsubstantiated reports stated that Daredevil would bow on the same day, offering a bit of Marvel vs. DC Comics competition for the fans’ eyeballs.

Season Two will introduce Jon Bernthal as Frank Castle, a.k.a. the Punisher — a cutthroat vigilante who has no qualms about killing those he regards as bad guys. Also new to Hell’s Kitchen is Elodie Yung as Elektra Natchios, a former girlfriend of Matt Murdock (Charlie Cox) who has become an assassin for hire — at least according to the comics’ lore.

Noteably, the trailer also specifies that the new season will be available worldwide on the release date, in all territories where the streaming video service operates.

Watch (or re-watch) Season One now on Netflix, and keep up with Daredevil with SciFi Stream’s show guide! We’ll be updating the episode guide with our own episode ratings as we make our way through the new season starting March 18.