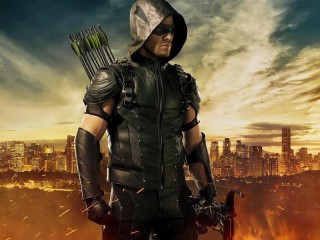 Television’s most kick-ass comic book hour is back on our screens in just one month! Now The CW has pulled back the curtain on a 2-minute trailer for the fourth season of Arrow.

Oliver Queen’s plans for a happily-ever-after will come crashing down when the new season begins, as Star City (recently renamed in honor of Ray Palmer, believed to have been killed in the explosion at the end of last season) comes under threat from former League of Assassins member Damien Darkh (Neal McDonough, Captain America: The First Avenger).

As the show moves Oliver closer and closer to his comic book persona, look for a rebirth of the Arrow vigilante as the Green Arrow.

Arrow premieres Wednesday, October 7 (8/7c) on The CW. Check out the trailer below, and keep up with the show all season long in our Arrow show guide!