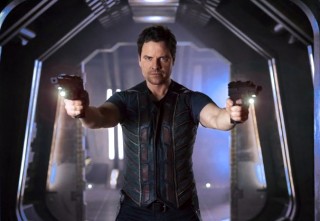 Syfy Channel’s (alleged) return to outer space was highly anticipated and largely disappointing when it premiered in December of 2014: Ascension turned out to be something of a bait-and-switch, as viewers learned in the mini-series’ big twist that those on board the “ship” weren’t actually in space at all.

This week the cable network — which burned a lot of long-time fans with its treatment of the Stargate franchise — makes good on its promise to return to space and traditional science fiction. Dark Matter is everything we’ve been wanting since the likes of Star Trek, Stargate, Firefly, and Battlestar Galactica went off the air: drama and adventure in the far reaches of the galaxy, with interesting characters, humor, cool tech, and secrets to be uncovered.

Dark Matter wears its genre influences on its sleeve, and at least in this episode that’s Stargate Universe and Firefly. It’s a pretty good combination (even if Joss Whedon is difficult to match in witty character dialogue), and the script and on-screen production design show off the mature sensibilities and sci-fi street cred of creators Joseph Mallozzi and Paul Mullie (who spent 11 years with the Stargate franchise). As the show continues to roll out its 13-episode first season, though, I’ll be looking less and less for the show’s similarities to my other favorites and more for its own emerging voice. 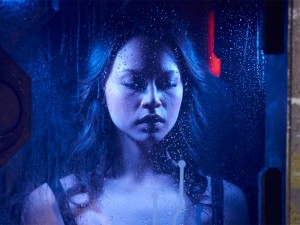 The first episode — which airs Friday night on Syfy (10/9c) — is only half of the opening story, and it feels like mostly set-up. The first half introduces the crew of a ship in deep space, who wake up with alarms blaring and no memory of who they are or where they are going. They must get to know not only each other but themselves, as well as the ship and its formidable support Android (Zoie Palmer). Since they don’t yet know their names, they identify one another based on the order in which they woke up …

“One” (Marc Bendavid) is the everyman, who comes out of stasis looking so much like a fish out of water that I wonder if he was originally a passenger rather than a member of the ship’s very capable crew. He tries to take charge but isn’t quite sure what to do with himself — think of an early Daniel Jackson crossed with Guardians of the Galaxy‘s Peter Quill. There’s a lot of story potential here.

“Two” (Melissa O’Neil) has “female lead” written all over her: leadership skills, a take-charge attitude, and absolutely stunning (… by which I mean that right cross). If she’s reading a phone book out loud for most of episode 2, I’ll be there for every minute of it.

“Three” (Anthony Lemke) perhaps needs the most work after the end of the first hour. Self-serving, trigger-happy, brash and not afraid to tell you exactly what he thinks, he’s clearly inspired by Firefly‘s Jayne Cobb (– and them’s mighty big boots to fill).

“Four” (Alex Mallari Jr.) remains pretty much a blank slate after hour one — the strong, silent type, who looks like he has deep well of emotion and history hiding behind a stoic exterior and some serious talents with blades.

“Five” (Jodelle Ferland) is “the Kid,” something of a blip among the others who awaken from stasis. She looks like she may bring some tech skills to the crew (once they figure out who they are and what they ought to be doing with themselves), as well as perhaps some unsettling psychic intuition.

“Six” (Roger R. Cross), finally, looks like he should be “the Muscle” but in fact just might be smarter than everyone else around him. If he’s his own little riddle wrapped in a mystery, I hope it has a fun reveal down the road. 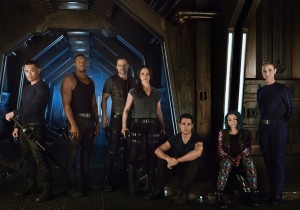 The cast of Dark Matter (Syfy – Click to enlarge)

The episode’s second half takes this group of strangers to the planet where their ship was originally going — a remote mining colony in desperate need of aid. There’s not much to say here, as the premiere cuts off in the middle of this story … after a fantastic revelation, but little in the way of resolution so far.

Instead, the episode delivers a knock-out, game-changing final moment.

So it’s tough to render a full verdict on Dark Matter after just the first hour. By virtue of the nature of this introduction it seems as though the show will live or die based upon the strength of its seven characters. Are they going to be interesting enough, and well-drawn enough, that we want to come back to join them on their adventures each week? So far there is definite potential in this crew — and the closing twist amplifies that exponentially. Even great character dramas like LOST needed time beyond the first episode to fully realize their characters, most of whom only serviced the plot in the pilot. (Locke wasn’t really our Locke until “Walkabout,” and Charlie wasn’t Charlie until “The Moth.”)

It’s also worth noting that this week Syfy is bringing back a 3-hour “Sci-Fi Friday” line-up of original scripted programming, the loss of which fans have long lamented. WWE Smackdown is now on Thursdays where it belongs. So we’re not only looking forward to a summer with Dark Matter, but with a new Friday night destination: Defiance (2-hour premiere Friday, 8/7c), Killjoys (premieres June 19, 9/8c), and Dark Matter (10/9c).

The Verdict: Dark Matter is going to be a fun ride, and while it inevitably will be compared to other shows hopefully it will prove quickly that it is capable of building its own legacy. The show is off to a good start, and if the goal of a pilot is to get viewers to come back for more … count me in.