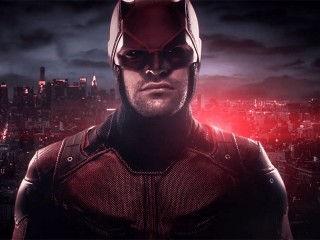 Daredevil is officially a hit.

The new Marvel series debuted on Netflix just a couple of weeks ago, and while the company does not release viewership data it has given the show a quick renewal for a second season. (For those counting, the renewal came 11 days after the first season debut.)

Charlie Cox stars as Matt Murdock, blinded as a child, who is a New York defense attorney by day and masked vigilante by night.

Showrunner Steven S. DeKnight will step aside as Doug Petrie (Buffy the Vampire Slayer) and Marco Ramirez (Sons of Anarchy) take the reigns for Season Two. The pair worked with DeKnight and Drew Goddard during Season One; Goddard and Jeph Loeb (Agents of S.H.I.E.L.D.) remain executive producers next year. 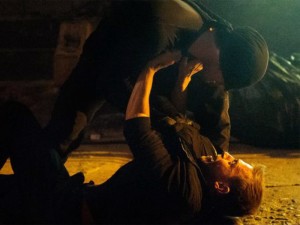 Daredevil has received hugely favorable reviews for its first season, all 13 episodes of which are streaming on Netflix now.

Until now it was uncertain whether additional seasons of the show were even a possibility, or if Daredevil was to be a one-off. Netflix acquired the show as part of a deal to make four Marvel series, to be followed in the next few years by A.K.A. Jessica Jones, Iron Fist, and Luke Cage — all leading to a team-up miniseries called The Defenders.

Jones is now in production for a debut later this year, with Krysten Ritter (Breaking Bad) starring. Mike Colter will appear as Luke Cage in that series before headlining his own. Co-stars for Jones also include David Tennant (Doctor Who), Carrie-Anne Moss (The Matrix), Rachael Taylor, Eka Darville, Erin Moriarty, and Wil Traval.

Season One of Daredevil does sow some seeds that will lead to The Defenders — but don’t expect to see those other characters until next year.

“With Daredevil being the first out of the gate, we didn’t have the opportunity to cross-pollinate with other shows because they still in their formative stages,” DeKnight told THR. “My hope is moving forward with Jessica Jones, Luke Cage, and Iron Fist, now we will see more cross-pollination.”

Stick with SciFi Stream for more on Daredevil, including our growing Season One episode guide (as we work our way through the first season).