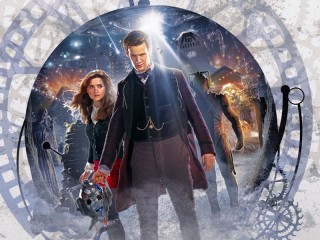 It’s Christmas Day, but this year that’s bittersweet for fans of Doctor Who.

It means we get to enjoy another Doctor Who Christmas special, in the long tradition that includes such favorites as “The Christmas Invasion,” “The Runaway Bride,” “Voyage of the Damned,” and “A Christmas Carol.” This year’s final new episode, “The Time of the Doctor,” airs on BBC One in the U.K. starting at 7:30pm, and on BBC America here in the U.S. starting at 9/8c.

But “The Time of the Doctor” also brings the final adventure for actor Matt Smith, who took up the iconic role just shy of four years ago. Smith’s run as the “Eleventh” Doctor spans three seasons, 44 episodes, the show’s 50th anniversary, a wedding, rewriting the Time War, and three full-time companions (Amy Pond, Rory Williams, and Clara Oswald).

And that says nothing of the Daleks, the Silence, the Weeping Angels, the Cybermen, and so many other villains … many of whom return in tonight’s episode, in which they attempt to lure the Doctor into a trap involving the planet Trenzalore — the place he knows will one day be his grave.

“Silence will fall when the question is asked …”

With the end of one era comes the start of the next, of course. That’s one of the great things about Doctor Who. With Eleven’s regeneration tonight, fans will get our first introduction to the Twelfth Thirteenth Doctor, played by Peter Capaldi.

For more on “The Time of the Doctor” — including trailers, photos, and more — head over to the Specials section of our Doctor Who show guide! And be sure to visit the Forum to talk about the episode after it has aired.