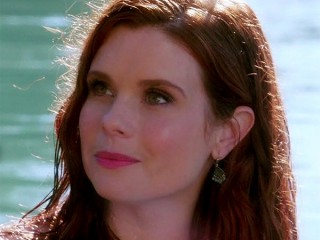 Ready to meet the Little Mermaid herself? Ariel is coming to Once Upon A Time this Sunday, November 3.

AFTER BEING SAVED BY ARIEL, SNOW WHITE RETURNS THE FAVOR BY HELPING HER NEW FRIEND GET ACQUAINTED WITH PRINCE ERIC, AND EMMA, MARY MARGARET, DAVID AND HOOK ATTEMPT TO RESCUE NEAL FROM PAN’S ENCAMPMENT, ON ABC’S “ONCE UPON A TIME”

“Ariel” – Back in the Fairy Tale Land that was, when Ariel (JoAnna Garcia Swisher) saves Snow White from drowning in the ocean’s depths, Snow returns the favor by helping her new friend get acquainted with Prince Eric, with whom she has fallen madly in love with. Meanwhile, Emma, Mary Margaret, David and Hook attempt to save Neal, who is imprisoned in one of Pan’s encampments, and Regina and Mr. Gold begrudgingly team up to find a way to take down Pan.

Other guest stars include Robbie Kay as Pan, Gil McKinney as Eric, Parker Croft as Felix, Josh Kalender as lead knight, Adam Lolacher as the black knight, and Arpad Balogh as footman.

“Ariel” was written by show creators Edward Kitsis and Adam Horowitz, and directed by Ciaran Donnelly.

Point your browser to our Once Upon A Time series guide for more on the new season! The show airs Sundays at 8/7c on ABC.