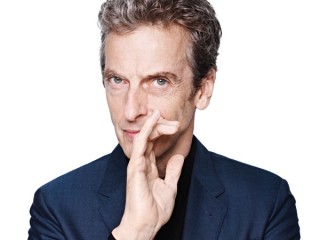 The BBC announced the next doctor in a live television special broadcast around the world.

Actor Peter Capaldi will take over the venerable role at the end of this year.

“Being asked to play The Doctor is an amazing privilege,” said the actor — himself a lifelong fan. “Like the Doctor himself I find myself in a state of utter terror and delight. I can’t wait to get started.”

Raised in Glasgow, the 55-year-old actor has appeared in The Hours, The Thick of It, and Skins. He played the pivotal role of John Frobisher in the Doctor Who spin-off Torchwood: Children of Earth. And he appears in the new Brad Pitt zombie movie World War Z, credited as — wait for it — “W.H.O. Doctor.”

Capaldi also already has Doctor Who on his list of credits: He played the patriarch Caecilius in the episode “The Fires of Pompeii” (pictured below). (Coincidentally, that episode also co-starred actress Karen Gillan, who went on to be recast as the Eleventh Doctor’s companion, Amy Pond.)

He’ll appear as Cardinal Richelieu in the BBC’s upcoming adaptation of The Three Muskateers.

To keep things under wraps Capaldi auditioned secretly at the home of executive producer Steven Moffat. At 55, he is the oldest Doctor to fly the TARDIS since the show returned to airwaves in 2005.

“It’s an incendiary combination: one of the most talented actors of his generation is about to play the best part on television,” Moffat said. “Peter Capaldi is in the TARDIS!”

“I’m so excited Peter Capaldi is the man taking on the challenge of becoming the Twelfth Doctor,” co-star Jenna Coleman said. “With Steven’s writing and his talent I know we’ll be making an amazing show with an incredible incarnation of number 12. I can’t wait to start this new adventure!”

Matt Smith announced earlier this year that he is departing the show at the 2013 Christmas special. That follows the 50th anniversary special — co-starring Smith and Tenth Doctor David Tennant, along with former companion Billie Piper — to be broadcast on November 23.

The 30-minute special featured an interview with Smith, as well as appearances by Peter Davidson (the Fifth Doctor), Jenna Coleman (“Clara Oswin”), Bernard Cribbins (“Wilfred Mott”), Steven Moffat, and a host of fans.

Capaldi was the odds-on favorite in rampant speculation across Britain last week.

The Doctor will regenerate into his twelfth incarnation during the Christmas special, and officially take over the TARDIS controls for the show’s eighth season (with companion Jenna Louise Coleman). Watch for it in 2014!

What do you think of the casting choice? Sound off below!