This week the Internet has been abuzz over Syfy Channel’s surprise news that it will end Eureka next summer, after five seasons. (Season 4.5 is currently airing; 13 episodes for Season Five are nearing completion.) Warehouse 13, meanwhile, has been renewed for a fourth season.

Eureka‘s ratings are good, at over 2 million viewers (Live + Same Day) Mondays at 8 p.m.  But costs tend to rise the older a show gets.  And since revenue is tied to ratings (viz. the ad rates the network can charge), the profit margin shrinks from both sides.  Syfy cited this as the reason for ending Eureka (which reps suggested was a decision ultimately forced upon them by Comcast, now majority owner of parent company NBC Universal).

As we saw a week ago, Syfy was thinking about a limited, 6-episode sixth season to wrap up the show … but even that idea fell by the wayside.  After fan backlash at the cancellation, however, they did give the writers one additional episode for Season Five to give the show a proper conclusion.

Warehouse 13, by contrast, continues to be Syfy’s highest rated original scripted drama with 2.3 million on Monday nights and 3.2 million after DVR viewing is factored in.  The series has even increased its share of adults 18 to 49, up 15 percent for the first two episodes of the current season.

There’s no word on Alphas or Haven, yet. Alphas is off to a solid start on Monday nights, averaging just under 2.2 million as Warehouse‘s lead-out. Haven is closer to 1.8 million, which may be lower than Syfy is hoping for in the post-WWE time slot on Friday nights.

I don’t follow either Eureka or Warehouse very closely, myself, so I’m not sure what to say.  The Warehouse pick-up is obviously a no-brainer.  It’s the biggest show the network has ever had, precisely because no other show has been able to capture as much mass appeal.  Middle-aged viewers generally have no problem leaping from NCIS to Warehouse 13 — it’s a police procedural with appealing characters, some light-hearted banter, and only a little sci-fi element for which to suspend disbelief.

Eureka‘s cancellation is a surprise, though. Obviously Syfy (and/or Comcast) thinks they can do better with another show — younger shows, if you can launch them strongly and keep them close to 2.5 million weekly viewers, are just more profitable.  But when it comes to television fandom — especially in our genre — the profitability calculation can’t be the only factor. It may, at the end of the day, have to be the decisive factor — but networks have to take into account the loyalty relationship it’s established with its viewers.  Fans invest themselves in these characters and stories, so when a series like Eureka is still doing well in the ratings and still making money (if not as much), it should be given the benefit of the doubt. 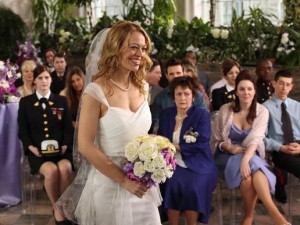 Warehouse 13 will live to see another season, with a pick-up for Season Four this week.

Syfy and Comcast would have been much better off giving a long-lead warning to the show’s producers and fans. Even with a shortened order for Season Six, this means that everyone would have had two years to deal with and plan for the show’s conclusion.  Instead they yanked the rug out from underneath both the producers and the viewers when they simply did not have to.

Over at GateWorld we see a huge number of fans of Stargate (and other shows on the cable channel) that are furious because their shows are getting axed without such warning.  The result is that they swear off the network as incapable of dealing sensitively with their fandom and their favorite shows — so they refuse to watch newcomers, like Alphas.  After cancelling Caprica, Stargate Universe, and now Eureka within less than a year, Syfy has given itself a huge image problem among hardcore science fiction viewers.

In some cases, like Caprica, it’s hard to avoid the way cancellation plays out.  It’s an expensive show with low numbers, and the studio’s contracts with the cast was nearing expiration.  Syfy needed a decision, and those October 2010 numbers screamed “cancel me.”  For other series, like Eureka, the decision is more uncertain.  My point is that the network is shooting itself in the foot — heaping fuel upon its image problem — by not giving these shows and their fans the benefit of the doubt.

Everyone knows that their favorite shows must come to an end sometime.  The only satisfying ending is one that is expected, one that is led up to and written by the writers as they intended it.  Cancellation without warning makes this impossible, and it betrays the viewer’s investment. Of course, such warning isn’t always possible — whether it’s because of the cost of production or low, low ratings, some shows can’t justify the order of additional episodes.  But then there are some — like Eureka — that can stay afloat long enough to finish telling its story.

And it’s Syfy’s responsibility to recognize that that’s the case, and make sure it happens … even if it means making a little less money from that show next year.