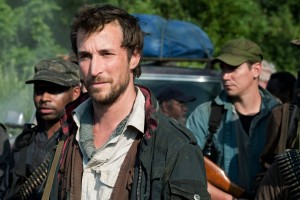 While several of the genre shows currently airing look like they won’t survive the 2010-2011 season (I’m looking at you, The Event and No Ordinary Family), several cable networks are gearing up with brand new sci-fi offerings this summer.  One we’re looking forward to seeing is Falling Skies, TNT’s first foray into genre programming (that we can remember) since Babylon 5: Crusade.

Today TNT announced the premiere date for the show, which stars ER‘s Noah Wyle is a fast-paced drama about alien invasion: Sunday, June 19 at 9 p.m. (8 Central).  After the two-hour series premiere that night, Skies will settle into its Sunday night 10 p.m. time slot.

Wyle plays Tom Mason, a Boston history professor who falls in with the resistance movement after his wife is killed and one of his children taken.  Moon Bloodgood (Journeyman, Terminator: Salvation) co-stars.  The show is produced by DreamWorks Television and executive produced by Steven Spielberg.

Mark your calendar for June, and check out the show’s official Web site.  And watch the trailer for Falling Skies below!

What do you think of the premise?  Between V and War of the Worlds has alien invasion and the whole “human resistance movement” been done to death?  Or could this be a fresh take?  Sound off in the comments section below.