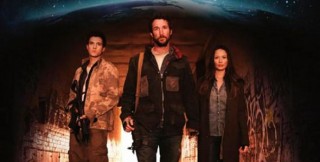 Falling Skies is a new science fiction series we will definitely be watching when it debuts on TNT in June.  The cable net has released a second full-length trailer plus a handful of TV spots for the series, which stars ER‘s Noah Wyle and Journeyman‘s Moon Bloodgood (who also appeared in Terminator: Salvation).

As Wyle explains, the show picks up six months after an alien civilization has invaded our planet, and follows the survivors who recognize that surviving that cataclysm is just the beginning. Now the war to take back the Earth begins.

This trailer also shows actor Colin Cunningham, who plays one of the grittier resistance leaders.  Give him a haircut and an Air Force uniform and you might recognize him as Major Paul Davis on Stargate SG-1.

It includes new footage, cast members talking about the premise, and new details about the aliens and their plans for coming to Earth.  Oh, and aliens.  Lots and lots of aliens in what look like battle suits, kicking ass and being ass-kicked!

Check out the videos below, and then post a comment if you’re planning to watch this one.

The TV spots are mostly shorter mash-ups of footage from the two trailers.