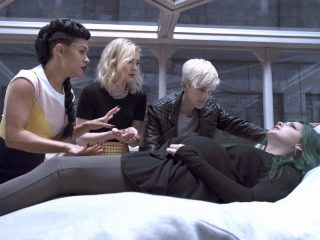 After Reeva Payge seizes control of the Hellfire Club’s “Inner Circle,” Polaris prepares for the birth of her child. The Mutant Underground rescues a group from a Sentinel raid on an apartment complex, and the Struckers disagree over how to look for Andy.

THE MUTANT UNDERGROUND RETURNS ON THE ALL-NEW SEASON TWO PREMIERE OF "THE GIFTED" TUESDAY, SEPTEMBER 25, ON FOX

Reeva Payge (Grace Byers) purges the Inner Circle of those who disagree with her, leaving her completely in charge. Then, fast-forward six months, when the Mutant Underground saves a girl, but not her family, from a Sentinel raid. Against the group's wishes, Eclipse and Caitlin meet with a criminal hacker to get info on the Inner Circle. Meanwhile, Polaris prepares for the birth of her baby, her contractions magnetizing anything metal and wreaking havoc. She also makes Andy promise to save the baby, no matter what, in the all-new "eMergence" Season Two premiere episode of THE GIFTED airing Tuesday, Sept. 25 (8:00-9:00 PM ET/PT) on FOX. (GIF-201) (TV-14 D, L, V)