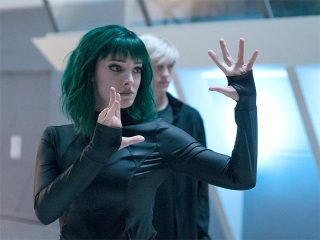 After Lorna demands answers about their next secret mission, Esme takes her to case their target — and confides in her about the Frost sisters’ secret past. Reed is reluctant to take lessons from John, but must use his powers to help Mutant refugees escape when Jace leads the Purifiers to their doorstep.

THE FROST SISTERS' PAST IS REVEALED ON AN ALL-NEW "THE GIFTED" TUESDAY, NOVEMBER 6, ON FOX

The Inner Circle prepares for a secret ambush, but Polaris is reluctant to join and Reeva tasks Esme with getting Polaris on board. Esme confides in Polaris, revealing her and her sisters' troublesome past. Meanwhile, Thunderbird trains Reed on controlling his powers and The Purifiers attack The Mutant Underground as they attempt to rescue a group of homeless mutants in the all-new "iMprint" episode of THE GIFTED airing Tuesday, Nov. 6 (8:00-9:00 PM ET/PT) on FOX. (GIF-206) (TV-14 L, V)