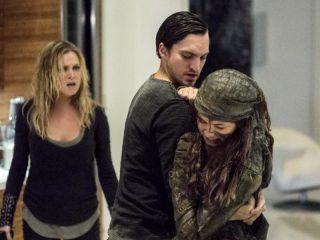 As Clarke and Abby weigh the moral cost of the Nightblood experiments Emori tries to convince Murphy to flee with her, convinced that her life is viewed as expendable. Meanwhile Bellamy risks his life when a black rainstorm hits Arkadia, and a reckless and despondent Octavia finds shelter with Ilian.

THINGS TAKE A TURN FOR THE WORSE