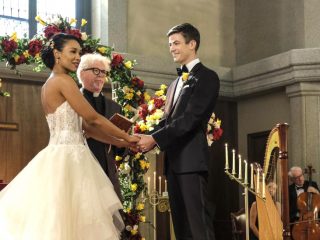 Kara and Alex travel to Earth-1 to attend the much-anticipated wedding of Barry Allen and Iris West, where they cannot get too far from their own relationship issues. But when an unknown group of criminals attack the festivities, they must join forces with Earth’s mightiest heroes.

THE EPIC FOUR-WAY CROSSOVER WITH "ARROW," "SUPERGIRL," "THE FLASH" AND "DC'S LEGENDS OF TOMORROW" BEGINS