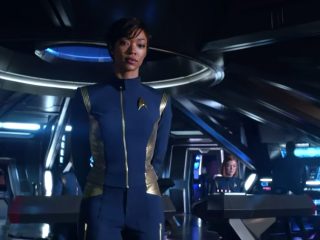 Following hot on the heels of that first photo earlier today, CBS has just premiered the first full-length trailer for Star Trek: Discovery.

At nearly two and a half minutes the trailer shows off most of the core cast of characters, the Discovery (in much better resolution than the rough teaser from last year), the Starfleet uniforms, new aliens, some redesigned and fierce-looking Klingons, and some pretty impressive visual effects. Take a look below.

CBS — which held its media upfront presentation today — also announced that Discovery will premiere this fall on CBS All Access, and will have its original order of 13 episodes extended to a 15-episode first season.

The network also confirmed that it will broadcast the first episode before the show settles into its regular home on the digital streaming service.

Last but not least, CBS announced that All Access will also be home to Talking Trek, the venerable franchise’s first-ever companion after-show. No news yet on who will host or what the format of that show will be.

STAR TREK: DISCOVERY will follow the voyages of Starfleet on their missions to discover new worlds and new lifeforms, and one Starfleet officer who must learn that to truly understand all things alien, you must first understand yourself.

Discovery is set ten years before the original Star Trek. 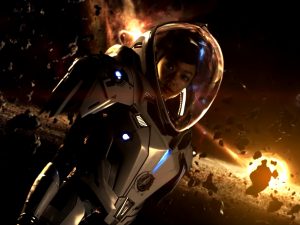 Sonequa Martin-Green (The Walking Dead) stars as Michael Burnham, First Officer of the Discovery. In this trailer she appears to begin as First Officer of another ship and is offered her own command.

Michelle Yeoh co-stars as Philippa Georgiou, the Captain of the Federation starship Shenzhou. It looks like she is Burnham’s mentor and commanding officer when the series begins.

Not seen is Jason Isaacs, who will play Captain Lorca — the Captain of the Discovery and Burnham’s new C.O.

The Vulcan in the trailer is none other than Ambassador Sarek, Spock’s father, played by James Frain (Gotham). He appears to have a personal connection to Michael, and remains in communication with her while she is on assignment in a distant region of space.

Doug Jones plays Saru, a science officer on the Discovery and a new alien species created for the show. 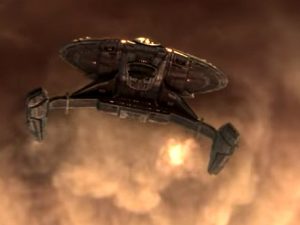 Chris Obi reportedly plays T’Kuvma, a Klingon leader who makes it his mission to unite the Empire’s disparate houses.

David Semel directs the first episode of the series, from a script by executive producers Bryan Fuller and Alex Kurtzman.

Stick with SciFi Stream for much more Star Trek: Discovery in the months to come!