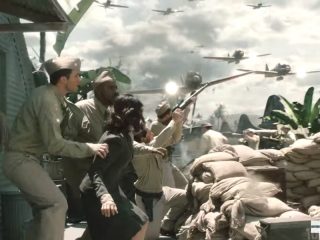 When it comes to new genre fare on network television this season, Timeless is going to be the one to watch.

NBC has released a pair of new teaser trailers for the time-travel drama, which starts in just two weeks and looks to have some shared DNA with the likes of Stargate, 12 Monkeys, and Rewind.

The first is a stylish and effects-heavy tease as the three main characters — Abigail Spencer as history professor Lucy Preston, Matt Lanter as Delta Force MSgt. Wyatt Logan, and Malcolm Barrett as scientist and time machine pilot Rufus Carlin — step from one time period to another:

The team must chase Garcia Flynn (Goran Visnjic) through time after he steals the more advanced version of the time machine to execute a secret agenda.

The second video runs a full three minutes and offers a sneak preview of the premiere episode, including snippets of the cast and producers talking about the show:

The series is created by Eric Kripke (Supernatural) and Shawn Ryan (The Shield).

Timeless starts Monday, October 3 on NBC and will air at 10/9c after The Voice. Keep up with the new show all season long with SciFi Streams’ new Timeless show guide!