Get ready to return to the final frontier.

CBS confirmed today that it will bring Star Trek back to the small screen, with a new series set to debut in January 2017. The as-yet untitled show will make its worldwide premiere on CBS, then air new episodes in the U.S. exclusively on CBS’s digital streaming platform CBS All Access.

CBS Studios International will distribute the series for television and various media platforms around the globe.

The show will be produced by CBS Television Studios in association with Kurtzman’s Secret Hideout. Kurtzman is reportedly currently searching for a writer to script the pilot.

Kurtzman has TV chops including Fringe, Sleepy Hollow, Alias, Scorpion, Hawaii Five-O, and the new CBS hit Limitless (based on the Bradley Cooper film). The two have since gone their separate ways in writing and producing. 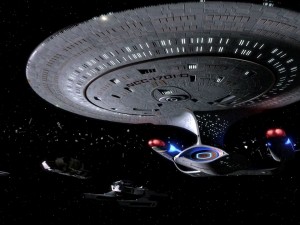 There is no word yet on the show’s title or setting, but CBS did say that it will not be connected to next year’s third film in the reboot universe, Star Trek Beyond. (Here’s hoping for something set in the Prime Universe, and in the 24th or 25th century.)

All Access is CBS’s paid subscription service, which offers more than 7,500 episodes from the current television season, previous seasons, and classic shows on demand, as well as the ability to stream local CBS stations live. The service currently runs $5.99 per month, and can be viewed on televisions through a variety of connected devices such as Roku, Chromecast, and Apple TV (so there’s no worry about squinting at Federation ships in pitched combat on your laptop).

Star Trek‘s return to TV will come on the heels of the franchise’s 50th anniversary in 2016, and nearly 12 years after Star Trek: Enterprise signed off the air.

“There is no better time to give Star Trek fans a new series than on the heels of the original show’s 50th anniversary celebration,” CBS Television Studios president David Stapf said. “Everyone here has great respect for this storied franchise, and we’re excited to launch its next television chapter in the creative mind and skilled hands of Alex Kurtzman, someone who knows this world and its audience intimately.”

Keep it with SciFi Stream in the months ahead for full coverage of Star Trek‘s return to television!