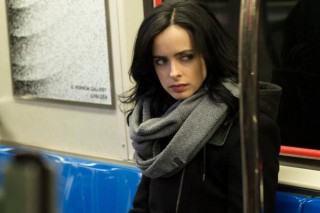 The first official look at Marvel’s Jessica Jones has arrived, with Marvel releasing five photos showing off the cast of the comic book adaptation coming to Netflix.

Set in the same world as last spring’s hit Daredevil — New York’s “Hell’s Kitchen” neighborhood — Jones tells the story of a washed-up former superhero with PTSD who tries to rebuild her life, taking on the role of a New York City private detective.

The photos include Krysten Ritter as Jones, Mike Colter as Luke Cage (who will headline his own show next year), David Tennant as Kilgrave (a.k.a. “The Purple Man”), and co-stars Carrie-Anne Moss and Rachael Taylor.

Take another look at the new teaser video for the show! Jessica Jones debuts on Netflix on November 20.