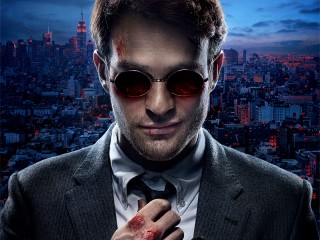 Marvel’s Daredevil is coming to Netflix in less than a month, and this week we got our best look at the show yet thanks to the release of a new, 2-minute trailer.

The original series from Marvel follows Matt Murdock (actor Charlie Cox), a lawyer by day who uses his heightened senses to take on the role of a masked vigilante by night, in order to stop crime in the seedy Hell’s Kitchen neighborhood of New York City.

The show is set in the same universe as the Marvel films and TV shows, but with a decidedly grittier, everyman feel to it (and it carries a TV-MA rating). It’s the first of Marvel and Netflix’s ambitious four-series plan, with A.K.A. Jessica Jones, Luke Cage, and Iron Fist to follow — all building up to a mini-series team-up event, The Defenders.

The full first season of Daredevil is on Netflix starting Friday, April 10. Stick with SciFi Stream for our new Daredevil show guide in the days ahead!