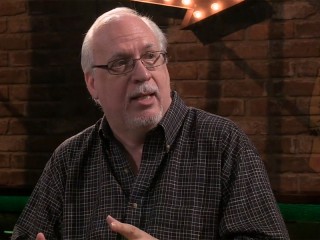 One year from now, every science fiction fan just might be talking about Sense8.

The new series from writer J. Michael Straczynski (Babylon 5) and producers Andy and Lana Wachowski (The Matrix trilogy) won’t just be Netflix’s first original science fiction series — or even the only full-length sci-fi series produced for Internet distribution to date, so far as we can tell. Sense8 will also look to break other new ground, including filming all over the world.

Straczynski talked about the series in a new video interview with Comic Book Resources, which you can watch below. (The whole thing runs around 23 minutes.)

Sense8 follows eight characters in different parts of the world who are telepathically or empathically linked to one another by a shared (and violent) vision.

According to TV Line the characters include: a closeted Mexican telenovela hunk, an Icelandic party girl, a German safe-cracker, a Korean businesswoman, an African bus driver, a transgender American blogger, “an apparently magic African-American” named Jonas, who appears to all of the visionaries, as well as his evil counterpart, “Mr. Whispers.”

Shooting locations will include the U.K., Seoul, Mumbai, Nairobi, Berlin, Mexico City, San Francisco and Chicago. Straczynski himself will direct the London sequence, which is expected to shoot for about three weeks.

Sense8 reportedly goes before cameras in June, and will debut its 10-episode first season in 2015. Keep it locked on SciFi Stream for more on the series!

(Via Comic Book Resources and WebProNews)