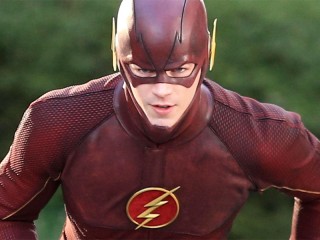 Marvel may be dominating the feature film world, but it’s another win today for DC Comics on the small screen. The CW has ordered Arrow spin-off The Flash to series.

Grant Gustin (Glee) stars as Barry Allen, an assistant forensic investigator working inside the Central City police department when a lab accident leaves him with super speed. The character first appeared in an Arrow 2-parter that aired in the fall.

Other new drama pick-ups for The CW include genre shows iZombie and The Messengers, and soap Jane the Virgin. The network passed on terrorism drama Identity and Supernatural spin-off Bloodlines.

So will The CW pair The Flash with Arrow for a Wednesday night sure-thing? Or send it to another night of the week (as the network did last season with The Vampire Diaries spin-off The Originals)? We’ll find out when the network announces its fall schedule plans at the upfront presentation next Thursday, May 15.

Stay tuned to SciFi Stream for lots more on The Flash!