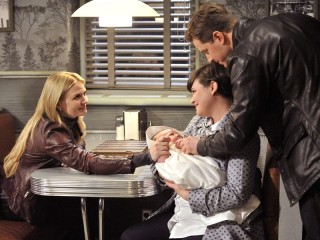 ABC’s Sunday night dramas are safe, with the network today announcing renewals for Once Upon A Time, Resurrection, and Revenge.

Once Upon A Time heads into its fourth season still a strong player, drawing both families and genre fans. Season Three began with 8.5 million viewers last fall, and has spent most of its weeks just over 7 million. The special 2-hour season finale airs this Sunday (8/7c).

Resurrection just completed its 8-episode first season, picking up very strong ratings: the series premiere drew 13.9 million viewers, and as a whole the show has averaged well over 9 million. No word yet on the size of the order for Season Two, or whether it will debut in the fall or remain a mid-season show.

Also renewed on the alphabet network are Agents of S.H.I.E.L.D., Grey’s Anatomy, Scandal, and Castle.