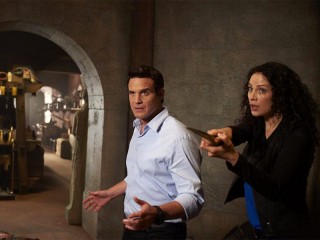 The hit series Warehouse 13 is blazing back onto our screens for one final mission!

The show’s fifth and final season makes its premiere on Syfy Channel on April 14 (9/8c), and this week the network unveiled a second trailer and a preview from the season premiere. (The first trailer is here.)

The first episode of the 6-episode limited season is titled “Endless Terror” … an unsettling twist on the “endless wonder” that the Warehouse normally provides for those who come to know its secrets.

That will be followed by “Secret Services” on April 21, and then episode 503, titled “A Faire to Remember.”

Stick with SciFi Stream for more on Warehouse 13 in our show guide in the coming weeks!